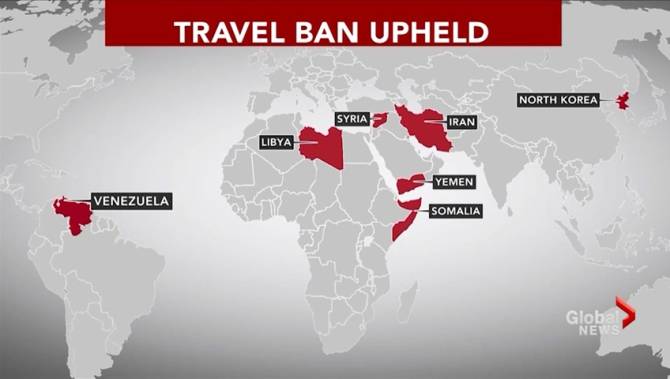 During the final week of June, the Supreme Court of the United States released their decision in Trump v. Hawaii, the case about the “travel ban” (aka the Muslim Ban) and whether or not it is legal.

The ban was upheld by the Supreme Court in a 5-4 decision that fell exactly down the political aisleof the court.  This means that restricting immigration from 7 countries, 5 of which are majority-Muslim, is legal.

The countries that are included in the ban are Iran, Libya, North Korea, Somalia, Syria, Venezuela, and Yemen.

The court’s majority opinion said that Trump had “sufficient national security justification” to order the ban, proving once again that all president’s have to do is hide behind ‘national security’ in order to discriminate.

But, the dissenting opinion of two Supreme Court Justices, Sonia Sotomayor and Ruth Bader Ginsburg, voiced all the anger and loss of faith in justice and equality that the majority decision had brought with it.

In the dissent, they said, “The United States of America is a Nation built upon the promise of religious liberty…Our founders honored that core promise by embedding the principle of religious neutrality in the First Amendment.  The Court’s decision today fails to safeguard that fundamental principle.  It leaves undisturbed a policy first advertised openly and unequivocally as a ‘total and complete shutdown of Muslims entering the United States’ because the policy now masquerades behind a façade of national-security concerns.”

The ‘advertisement’ they are referring to is from when Trump said in December 2015 that he is “calling for a total and complete shutdown of Muslims entering the United States until our country’s representatives can figure out what the hell is going on.”

The dissenting justices said that the court majority was “ignoring the facts, misconstruing our legal precedent, and turning a blind eye to the pain and suffering the Proclamation inflicts upon countless families and individuals, many of whom are United States citizens.”