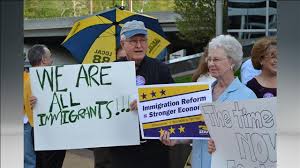 A group of over 300 peaceful immigration reformers gathered in Clayton last week, hoping for positive immigration reform to occur as soon as possible. The rally occurred at the corner of Bonhomme and Hanley with signs in hand to make Senator Roy Blunt aware of his constituent’s views on immigration.

Missouri legislators’ views on immigration have been relatively conservative following laws similar to Border States. While Missouri leaders have historically taken a high security and enforcement approach to Missouri’s immigrant population, there have been recent signs that lawmakers are considering modifying their views to reflect the demands of the economy. Missouri as a state needs both skilled and unskilled workers.

By attracting more immigrants to the universities in Missouri and allowing them to stay and work in the U.S. could have extremely positive effects on the economy. Additionally lower skilled workers are needed by farmers who have seasonal demands for their crops. With an aging population, it is difficult to manage a working farm with one set of hands. Furthermore, many younger, able bodied people who are citizens do not want the jobs that immigrants tend to work in. Missouri politicians should consider the needs of their constituents, many of whom rely heavily on immigrant labor.

On May 1, thousands gathered including labor unions, local faith leaders, and community organizations to support immigration reform. Missouri Immigrant and Refugee Advocate Vanessa Crawford-Aragon attended the vigil and said, “There’s no front door for them to come through there’s no line for them to stand in. Meaningful reform creates a broad roadmap for those people.” According to data, at least 70 percent of agricultural workers are undocumented and immigration reform is the only way to bring 11 million undocumented immigrants out of the shadows. By offering fair practices and better opportunities, immigrants will be able to contribute more to their communities and our economy if they no longer have to hide for fear of deportation.

Supporters of the cause plan to have a similar protest set for June 30th and hope their voices will be heard by lawmakers. More details to follow.