Olympic Runner Immigrated to the United States as a Child 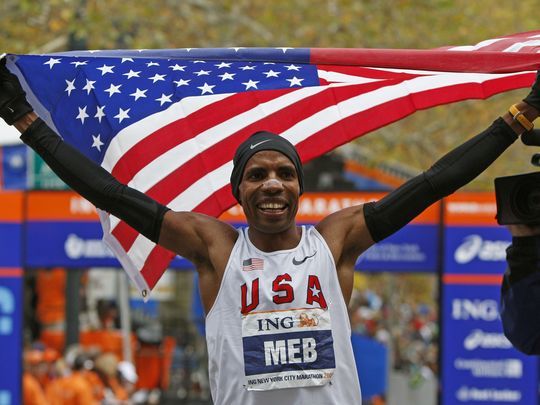 Marathoner, Meb Keflezighi, is retiring.  He attained a silver medal in the 2004 Olympics in Athens and has won the New York City and Boston marathons (as well as multiple other victories).

Keflezighi is from a large family from Eritrea, which was formerly considered a part of Ethiopia.  Russom, Keflezighi’s father, left Eritrea in 1981 when Ethiopian soldiers threatened to kill supporters of the Eritrean independence movement.

Russom immigrated with his family to Sudan, Italy, and finally the United States.  Meb Keflezighi and his family settled in San Diego in 1987.  Keflezighi was twelve-years-old at the time.

Keflezighi is one of twelve children.  Nine of his siblings earned college degrees, four of which obtaining degrees after their bachelor’s.  Russom and his older children would wake up at 4:30 a.m. so that he could teach them English.  They learned by reading and practicing words from the dictionary.

Keflezighi’s family sat at the dining room table after school completing their homework together.  The children were not allowed free time until all of their homework was finished.  Russom worked several late night jobs, such as cleaning office spaces, and Keflezighi would help his father when he was finished with his studies.

According to his children, Russom would say, “Look, the people who have an education work from nine to five and are home with their families right now, but I don’t have a formal education…Get your education because no one can take that away from you.”

When Bob Larsen, the track coach at University of California, Los Angeles (U.C.L.A.) caught sight of Keflezighi, he offered him a full scholarship.  When speaking of the scholarship award, Larsen said, “Facetiously a little bit, I say I gave the scholarship not to Meb, I gave it to his family.  They have the key on how to motivate sons and daughters.”

Keflezighi obtained his citizenship in 1998 and joined his first Olympic team in 2000.