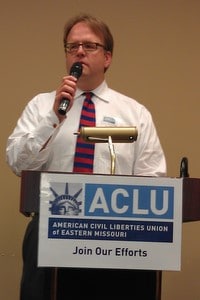 I had the pleasure of speaking at the annual membership meeting of the ACLU of Eastern Missouri.  I was on a panel to discuss the work of the ACLU-EM’s Muslim Rights Task Force.  I am the chair of that Task Force and we have been able to accomplish a lot in just a few years time.

The Task Force grew out of an interest by the ACLU-EM to engage more Muslims with their organization and to see if there were ways for the ACLU-EM to help protect the civil rights of Muslims.Since we started the Task Force in 2008-2009, representatives of ACLU-EM have visited ten mosques in the St. Louis area and have traveled to Columbia, Missouri to visit a mosque at Mizzou.  We have given talks right after Friday prayer to talk to Muslims about ways that their rights might be violated and to tell them that we could help them if they were contacted by law enforcement.  These presentations have been very well received.

Another important aspect of the work of the Task Force is that we have been able to recruit 10-12 volunteer lawyers to represent Muslims in “voluntary” FBI interviews.  It is our position that no Muslim should meet with law enforcement or representatives of the Joint Terrorism Task Force without an attorney present.  We have conducted training sessions for our volunteer lawyers which included a discussion of topics that are frequently addressed in these interviews and some role playing to help the lawyers understand more fully what might occur at an interview.

The final aspect of the Task Force’s work that I discussed was our recent Muslim Day at the state capitol.  With the rise of anti-Muslim rhetoric last year following the so-called “Ground Zero Mosque,” the preacher who wanted to burn the Quran and Representative Peter King’s congressional hearings, Muslims felt disenfranchised and disheartened by the state of the political discourse.  Local Muslims wanted to do something pro-active to demonstrate that we are part of the community and involved in public affairs.  When anti-Sharia legislation was introduced in Jefferson City, an opportunity arose for Muslims to assert their rights and to let legislators know that we were watching.

This led to the first ever Muslim Day at the Capitol.  Two busloads brought approximately 120 St. Louis Muslims to Jefferson City.  Muslims from other parts of the state met us there.  We had a rally on the steps of the Capitol which included the Pledge of Allegiance and a press conference.  The gathered Muslims then went to meet with their state representatives and senators to discuss all issues of concern, including the anti-sharia legislation.  For the most part, these efforts were very well-received.  A few legislators, specifically those who had sponsored the legislation, went ouf of their way to avoid interaction with their Muslim constituents.

I was joined on the panel by Imam Muhamad Hasic.  Imam Hasic spoke eloquently about how the problems in Bosnia began with anti-Muslim rhetoric and deteriorated from there.  The final speaker was Ms. Zainab Oyebamiji, one of the Muslim sisters who attended the rally.  She thanked the ACLU-EM for its important work, spoke emotionally about what it meant for her to go to Jefferson City with her kids and to be a Muslim involved in the political process.