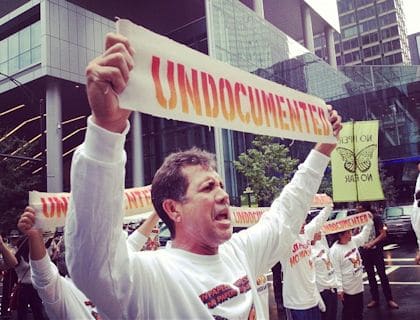 Some consider them heroes among immigrants yet others are criticizing their actions.  Immigration advocates are divided about the nine undocumented immigrant activists who attempted to cross into the U.S. from Mexico to protest deportations. Now, other advocates are speaking out against the immigrants’ decision to risk arrest and challenge U.S. laws.

Activists may risk their futures

David Leopold, former president of the American Immigration Lawyers Association, spoke out against the immigrants’ risky decision saying this is a publicity stunt that may backfire. It is understandable that the nine young immigrants want to help make a loud statement regarding the record number of deportations and to push for immigration reform, but “It’s very serious to cross out of the U.S,” Leopold says. The immigrants are seeking to be released and allowed back into the U.S. on grounds of political asylum. Even if they are let back in, Leopold has handled many cases where Dreamers who were frustrated left the U.S. voluntarily but then could not get a job, license or come back to the U.S.

May be a chance to make a statement

However, not everyone disagrees with the immigrants’ actions. In fact, many supporters say they are a courageous group engaging in civil disobedience to get attention from the Obama administration. Hopefully this can help gain attention and push immigration reform to pass. The Dream Action Coalition says they hope the Obama administration will create a different process for those deported from the U.S. to be able to return to America as well as a path to citizenship for undocumented immigrants residing in the U.S. now. The immigrants, now known as the DREAM 9, were taken into custody after they crossed the border in Nogales, Ariz. They were taken to the Eloy Detention Center where they staged hunger strikes. Some lawmakers say the nine could possibly complicate their efforts to pass comprehensive immigration reform because they may lose support from other undecided lawmakers.

“I’ve heard some people say that it’s a publicity stunt,” said Razeen Zaman, campaign organizer for the New York State Youth Leadership Council, which advocates for Dreamers. “It’s an awful and outrageous way to describe it.” Dreamers, estimated to total about 1 million, have been an important part of the push for immigration reform through social media and organizing gatherings. Whether or not the Dreamers receive support, it is clear “We wouldn’t be where we are today without Dreamers,” Leopold said. “They have brought this movement to the forefront.”