We wanted to introduce you to our clients, Keane and Abdoulaye.

Keane is a U.S. citizen who lives in New York.

Abdoulaye is a citizen of Senegal.

After falling in love, Keane filed an I-130 immigrant visa petition for her husband in 2019.

USCIS began processing the I-130 and approved the case in September of 2019.

They began waiting for a visa interview appointment at the U.S. consulate in Dakar, Senegal.

And wait they did.

Keane first reached out to us in March of 2021. She wanted to know if we could help her by filing a lawsuit.

She had heard that the embassy in Dakar was only processing student visas. Marriage cases were apparently on the back burner, which surprised her.

We talked about filing a lawsuit against the State Department and the National Visa Center.

Keane said she would wait a little longer and that she would reach back out if things did not get resolved quickly.

Turns out the State Department continued to drag the case out.

So in August of 2021, Keane reached back out to our office and chatted with firm attorney Andrew Bloomberg.

Keane decided to hire our firm to file a mandamus action against the State Department and the consulate in Dakar.

We filed the lawsuit on August 19, 2021 in federal court in Washington, DC.

Our office sent copies of the lawsuit along with summonses on August 20, 2021.

This meant that the government had to respond to the lawsuit no later than October 25, 2021.

On September 10, 2021, the State Department notified Abdoulaye that his immigrant visa interview had been scheduled on October 28, 2021 at the consulate in Dakar, Senegal.

Shortly before the government's answer was due, the assistant U.S. attorney assigned to the case notified us that he would be entering his appearance on behalf of the Defendants.

He asked that since Abdoulaye's interview had been scheduled, that he would like an extension to respond to the lawsuit.

This is what happens in the vast majority of our lawsuits.

But in most cases, they simply get working on the underlying case in the hopes of making the lawsuit go away.

Abdoulaye attended the interview on October 28, 2021. The consular official gave him a green paper and told him to return to the embassy on November 2, 2021 to pick up his passport and visa.

He did so and he had his ticket to the U.S. in just a few short days.

The U.S. attorney asked us to dismiss the lawsuit. And Tamara happily did so.

A great win for us and, more importantly, for Keane and Abdoulaye.

We never saw the judge.

We never fought anything.

We sued them, we served them, they got to work and we got our visa.

Not every case goes this quickly.

Keane and Abdoulaye were able to celebrate their first Thanksgiving together.

They were kind enough to send us a Thanksgiving photo of the two of them together.

This is why we fight for immigrants. Every day. 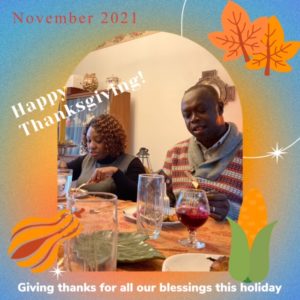