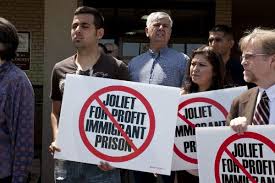 Opponents of detaining immigrants are taking a stand against a new proposal for opening an immigrant detention center in Joliet. Gov. Pat Quinn and Illinois Attorney General Lisa Madigan and seven other members of the U.S. House of Representatives are taking an active role in opposing the proposition. Quinn sent a letter to Department of Homeland Security Secretary Janet Napolitano asking her to reject the plans for the for-profit detention facility. 5,000 people also signed a petition and plan to propose it to Joliet’s City Council.

What the Plan entails

The plan is to build a federal immigrant detention center that would be owned by a private company based in Tennessee. A similar proposal by the same company was rejected last year when they proposed building a detention facility in a suburban area and they are once again being met with much opposition from Joliet residents and public officials. A Facebook page has been established.  With rumors that the City Council may not meet with the company, the detention facility’s spokesperson said, “The challenge for all of us is that this is so preliminary that we don't have all the concrete facts yet."

Why the need for more detention facilities

U.S. Immigrant and Customs Enforcement (ICE) have proposed building more new detention centers to help with the overflow in their system and have a place to house immigrants waiting for their deportation hearings. The new facilities are said to “feel less like a prison than the spaces now used by ICE.”  Despite the benefits promised by ICE, Joliet residents are not pleased. Residents, immigration rights advocates and local officials are criticizing a system based on deporting thousands of people annually as well as having a detention center run by a private company. Some worry that the detention facility focusing on profit will not work in the best interests of immigrants. While the facility would bring more jobs to the area and help benefit it economically, the cause for which it stands is more off-putting to individuals advocating against the facility.

No further details have been released regarding whether the private company will receive a hearing with the City Council to propose their plan, but it seems that citizens are reluctant to support opening up detention facilities for immigrants. "It's been very preliminary dialogue and we're waiting for more information (from ICE) on how or if we are going to proceed.”

If you have questions regarding deportation or the changing immigration laws, contact us at 314-961-8200 or visit our contact page.