The title of his speech – “Immigrants Make America Great.”

You can listen to the speech by clicking below.

Judge Kathy Surratt-States: Thank you. I’m very pleased to have with us today Mr. James Hacking to offer his thoughts on this occasion. Mr. Hacking practices immigration law at the Hacking Immigration Law. He received his bachelor’s degree and his law degree from St. Louis University. In law school, he was editor-in-chief of the St. Louis University Law Journal. He has tried immigration cases, including successfully litigating cases involving naturalization and green card delays. Mr. Hacking is also active in local civil affairs, having served on the US Attorney’s Hate Crimes Task Force and being a founding member of the Muslim Task Force of the ACLU of Eastern Missouri.

Jim Hacking: Thank you, your honor. Immigrants make America great. Immigrants make America great, and I can prove it. Approximately 43 million foreign-born people live in the United States. Broken down by immigration status, the foreign-born population includes 20.7 million naturalized US citizens and 22 million non-citizens. The number of foreign-born individuals in the US population has more than quadrupled since 1965 and is expected to reach 78 million by 2065.

40% of our country’s Fortune 500 companies have been founded by immigrants or their children. These firms generate $4.8 trillion a year in revenue. Immigrants make up 20.6% of all entrepreneurs in this country, despite representing only 13% of the overall US population. They also account for 21% of all business owners in 50 of the largest US metropolitan areas.

And if we think back and reflect on the contributions that immigrants have had in the City of St. Louis, it’s not hard to tell that immigrants bring great power and prospects and hope to our city. Anywhere there’s been a war in the last 40 years, there’s a lot of those people here in St. Louis, mostly because of the great work of the International Institute. We have many people from Vietnam. We have the largest population of Bosnians outside of Bosnia in the entire world. We have people from Afghanistan and Iraq and Nepal and Bhutan. And we have people from all those countries here with us today, becoming US citizens. It’s undeniable that certain areas of the city have been revitalized and reestablished by the presence of immigrants. We think about South Grand or Olive or other parts of the city that were in trouble, that were re-stabilized by the contributions of immigrants.

I want to tell you a couple stories about some of the immigrants that I’ve known or that I’ve had the pleasure of working with over the last couple years. About a year ago, I was at USCIS, where all of you went for your naturalization interviews, and we were waiting for a naturalization interview with my client. His name is Qasim. Qasim is from Iraq, and we were sitting there waiting for the interview to begin, waiting to be called in. There’s a banner there of Dr. Martin Luther King.

Qasim turned to me, and we were talking about life in Iraq versus life in America. He lived in Iraq under Saddam, and he talked about how … He said, “You see that banner there of Dr. King?” I said yes. He said, “If there was a banner of Saddam Hussein in Iraq, and you didn’t show it respect, if you made fun of it, or if you walked by it and nicked it, or if you just disrespected this banner of,” you know these huge banners they have in these cults of personalities, “if you did that you’d be thrown in jail.” And that struck me, because obviously that’s very different than life here in America, where we’re all free to express our views and our speech.

The other thing that impressed me about Qasim that day is, we’re waiting to go into the interview, and I saw something that I’d never seen before. As you all know, there are a hundred questions on the naturalization exam. They give you a book that has all the questions and all the answers, and you study the book, and that’s how you passed your test. But Qasim did something very different. He did something that I’ve never seen before. He had a notebook, and in his notebook he had written out each question. He hadn’t written it out in English. He hadn’t written it out in Arabic. What he did was, he wrote it out phonetically in Arabic, so in other words, he took the American words, he worked with somebody else, to write out all 100 questions, so that when he heard it, he heard it in Arabic. And he answered in Arabic, even though he was giving answers in English. I hope that makes sense. That dedication, that devotion, that intention to be a US citizen is something that all US citizens could learn from.

In my office is another fellow from Iraq. His name is Marwan. If anyone’s ever been to my office, you know Marwan. He sits at the front, and he’s like the front line, dealing with a lot of our immigrants. Marwan came to the United States, because when he grew up in Iraq in the ’80s and ’90s, he liked to watch American television. One day he was in Iraq, US troops were there, and there was a very stressful situation. The American soldiers had guns pointed at Marwan and some of his friends, and lucky for him he had watched so much American television, because he was able to calm down the situation, and he was able to bring peace and to avoid any kind of bloodshed.

Through that, he became friends with a couple of the soldiers, and he began translating for them. He worked helping the US Army for four years, helping people navigate the dangerous roads of Baghdad and the rest of Iraq. He got to come here, because our laws allow for people that help US soldiers to come to the United States.

I also think about another person in my office, Adela. I started my firm 11 years ago, and when I did, I hired a young lady. Her name is Adela. She came to the United States from Bosnia. She was working at the mall, selling cell phones, and I needed someone to help me translate and to work as my front desk person. Since that time, she’s got to finish her bachelor’s degree, she’s obtained a master’s degree, she now runs our entire office. We have about 15 people working there. She got her HR degree for her master’s, and she runs our entire office. She has two kids, and she’s building that better life that I talked about.

And the last immigrants that I want to talk about are my wife and my mother-in-law. My wife was born in 1972 in Egypt, and we are getting ready to take our kids back there for the very first time in a couple weeks. And I’m a little bit nervous about that. I don’t know what to expect when we go. My wife came to the United States in 1979, and when she came, she came from Egypt and landed in Chicago. If anybody knows what happened in Chicago in 1979, it was a huge snowstorm, so my wife went from the sand to the snow.

The only reason she was able to come was because her father was a surgeon, and US laws that had changed in the 1960s allowed surgeons to come to the United States and to build a life. But her dad had come first to work and to make enough money to send back. So she spent much of her early childhood away from her father. Her father was in England and then here, working to make enough money. But he didn’t have enough money to bring them all here, so Amany’s mother, Nargis, sold everything she had, every piece of gold, every piece of furniture, every human possession she sold so that they had enough money to bring Amany and Khalid and Ahmed to the United States.

They’ve built a wonderful life. Amany and I have built a wonderful life. We have four great kids, and Amany is the embodiment of the American dream. And the thing is, I could ask each and every one of you to come up here and tell your story, but if you will indulge me for just a minute, I would ask that each of our naturalization applicants please to close your eyes, just for a minute. Just please close your eyes. I ask that you reflect on that moment when you decided that you wanted to come to America, that you wanted to take a chance on yourself, to come to America to build a life.

You had to learn English. You had to learn US history. You had to pass the naturalization test, and you had to demonstrate to the satisfaction of the US Citizenship and Immigration Service that you had good moral character. Now, in a few moments you will complete that journey. You will take your seat at the table. You’ll swear your loyalty to the United States. You will join the rest of us as US citizens, and you will indeed make America great. Thank you. 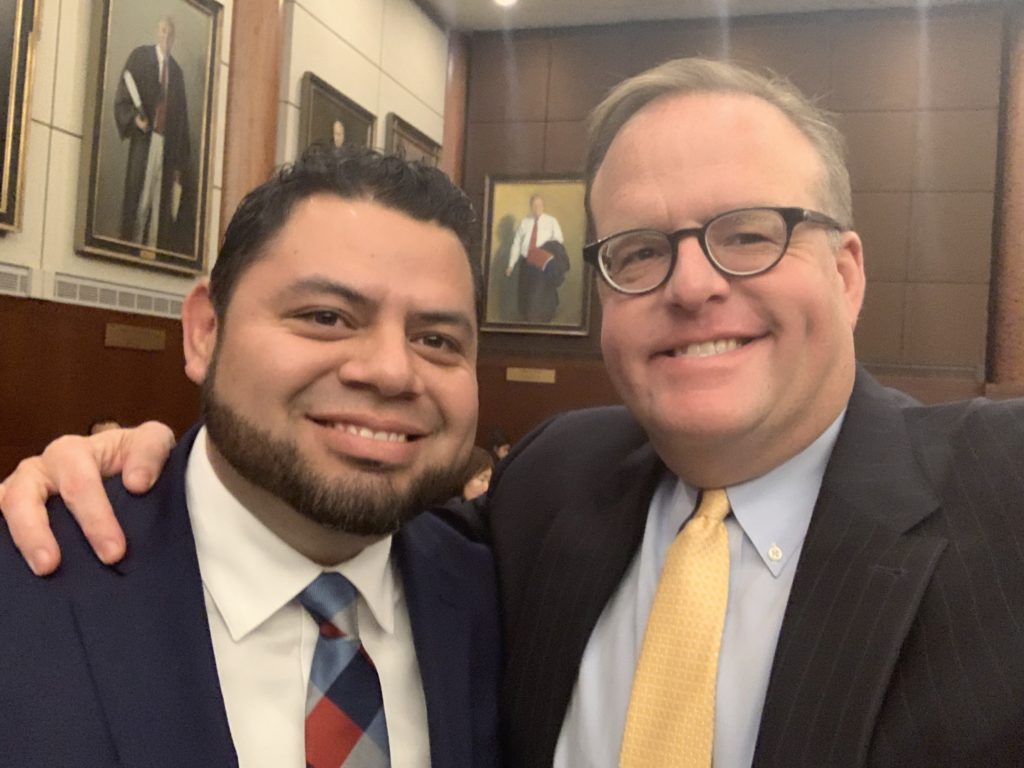