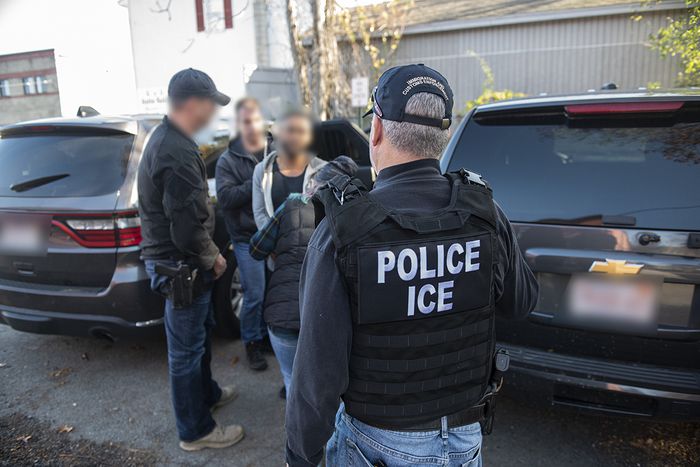 Authorities from the U.S. Immigration and Customs Enforcement and Removal Operations arrested 19 people in Massachusetts communities over several days after targeting undocumented immigrants who have been charged or convicted of drug crimes.

According to a news release from ICE, many of the people arrested in the sting were released from local law enforcement custody without notifying federal immigration agents.

The news release lists the circumstances surrounding some of the arrests, but ICE did not release the names of those arrested.

ICE gave a rundown of several arrests, but did not identify the suspects.

ICE came under fire in Massachusetts for arresting undocumented immigrants at courthouses.

Officials at ICE appealed a federal judge’s decision to temporarily block the arrest of undocumented immigrants who show up to court in Massachusetts. A coalition of attorneys, public defenders and public safety officials, led by Middlesex County District Attorney Marian Ryan, claimed that the immigration arrests were deterring people from attending court hearings and cooperating with local law enforcement.

In the news release, ICE explained the use of detainers against people who have been arrested on criminal charges. Detainers are used after ICE believes it has probable cause to remove a person from the country.

“The detainer asks the other law enforcement agency to notify ICE in advance of release and to maintain custody of the alien for a brief period of time so that ICE can take custody of that person in a safe and secure setting upon release from that agency’s custody,” the agency said. “When law enforcement agencies fail to honor immigration detainers and release serious criminal offenders onto the streets, it undermines ICE’s ability to protect public safety and carry out its mission.”

The agency further said Congress has not established any requirement directing ICE to seek a judicial warrant from federal courts before taking custody of an “alien on civil immigration violations.”

“This idea is simply a figment created by those who wish to undermine immigration enforcement and excuse the ill-conceived practices of sanctuary jurisdictions that put politics before public safety,” ICE wrote.

In the press release, ICE took a shot at sanctuary communities saying those communities put the public at risk and force ICE agents to make arrests on the street.

“Local jurisdictions that choose to not cooperate with ICE are likely to see an increase in ICE enforcement activity, as the agency has no choice but to conduct more at-large arrest operations,” ICE said.