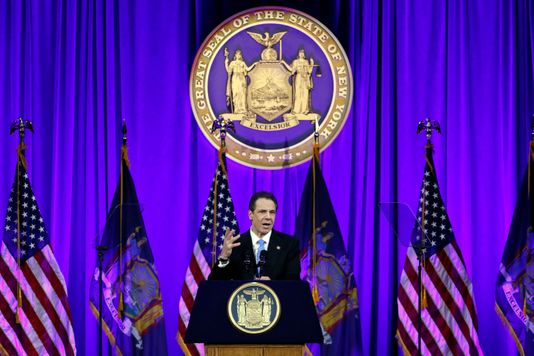 Gov. Cuomo’s fiery speech brought promises of a “new justice agenda” and an attack on the “cancer” of hatred that is plaguing the United States.

While President Trump was not directly named in Gov. Cuomo’s speech, Cuomo discussed how the federal government “has sought to demonize our differences and make our diversity our greatest weakness rather than our greatest strength.”

Gov. Cuomo even made note that Ellis Island was “the harbor where Frederick Trump arrived from Germany” and that Frederick Trump’s grandson would go on to “become the president of the United States.”

The governor announced that “America’s only threat is from within: it is the growing division amongst us.”

According to Gov. Cuomo, New York will be a “light to lead the way through the darkness.”

After Gov. Cuomo’s speech, Andra Day gave a live performance of “Rise Up.”  When released, Day’s song quickly became a common anthem for activism, hope, and–to some–America as a whole.  The lyrics include “I’ll rise up, I’ll rise like the day…I’ll rise unafraid…High like the waves…In spite of the ache, I’ll rise up, And I’ll do it a thousand times again.”