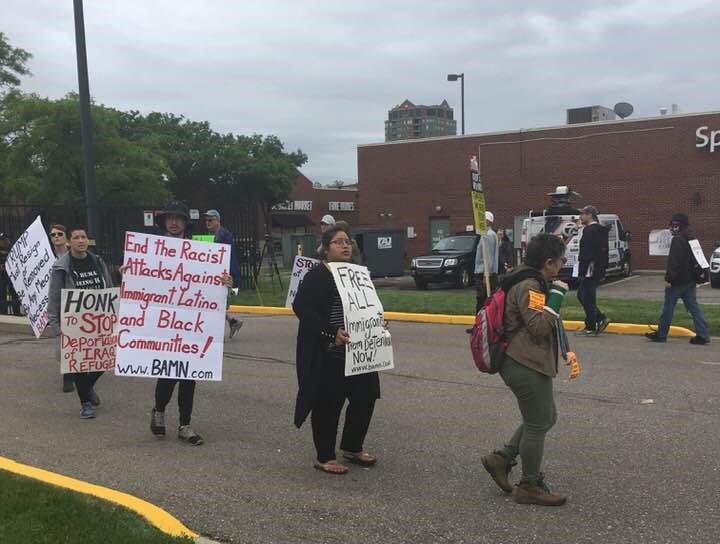 Protesters are back at U.S. Immigration and Customs Enforcement Offices in Detroit, trying to stop the potential deportation of more Iraqi nationals.

The U.S. has deported a small number of people back to Iraq after winning a court case on appeal late last year.

Some Iraqis with standing orders of removal had sued the government, saying it was too dangerous for them to return to Iraq. Many were Chaldean Christians from Metro Detroit, picked up in ICE raids during the spring of 2017.

But after a long, complicated court battle, the U.S. Sixth Circuit Court of Appeals overturned a lower court decision that stopped all removals until Iraqis could re-open their immigration cases. That means that Iraqis who haven’t moved to re-open their individual immigration cases, or who have exhausted that process, are now at risk of deportation.

Protesters who came to the Detroit ICE office Monday morning hoped to shut the facility down temporarily. They briefly succeeded in doing so last summer during a similar protest, though they didn’t appear to succeed on Monday.

Kate Stenvig is with the group By Any Means Necessary. She says the protesters plan to camp out at the ICE office for at least a couple of days, to remind people of what’s going on and to reinforce the idea that direct action is now the only possible fight left.

“We think that if Trump gets away with deporting this group of people, it will open the door for many more deportations,” Stenvig said.

Stenvig cited a recent U.S. State Department decision to evacuate most diplomatic personnel from Iraq (citing an unspecified threat from Iran) as proof the country is too dangerous to return to, especially for Chaldeans and other Americanized Iraqis.

“Even more than before, to deport people from the U.S. to Iraq is truly a death sentence,” Stenvig said.

That claim of the imminent threat of persecution, torture or death if returned to Iraq was at the heart of the court case Hamama v. Adducci that challenged the planned Iraqi deportations. However, the Sixth Circuit ruled narrowly that a Detroit federal district court didn’t have jurisdiction to intervene in immigration matters.

Miriam Aukerman, a Michigan ACLU attorney who represented the plaintiffs in the case, says only a small handful of people have been removed after the appeals court decision. However, the U.S. government appears to be pressuring Iraq at the highest levels to accept the repatriations, something Iraq had initially been reluctant to do.

“It’s a small number of people, but obviously it’s really terrifying to the community,” Aukerman said.

Even though Aukerman says it “clearly remains extremely difficult” for ICE to return people to Iraq, the agency is “doubling down” on trying to do so.

“Iraq is clearly still an extremely dangerous place. At the same time, the [Trump] administration is using incredible resources and pressure at the highest levels to get Iraq to take people back it doesn’t want to take back,” Aukerman said. “We are very concerned about what’s going to happen going forward.”

If you are an immigrant living in the Detroit or Dearborn, Michigan area and are worried about becoming a victim of these ICE raids, please don’t hesitate to contact Jim Hacking and our attorneys at (314) 961-8200 to discuss how these raids may affect you.