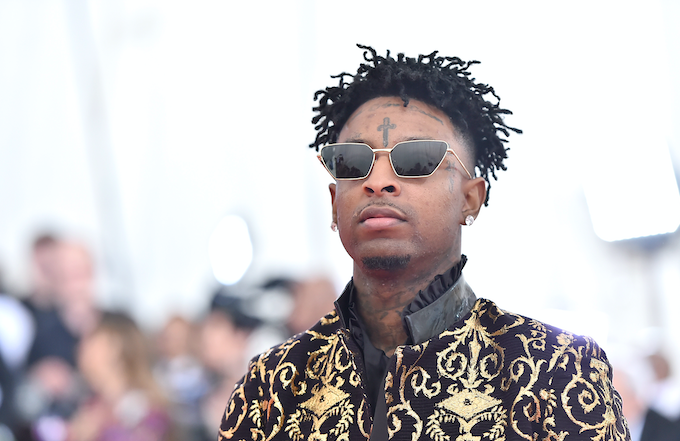 21 Savage has made a hefty donation to the Southern Poverty Law Center, a nonprofit civil rights organization that assisted his battle against Immigration and Customs Enforcement.

The rapper presented the SPLC with a $25,000 check that will ensure detained immigrants in the South will have access to legal counsel. According to the SPLC, only about 17 percent of immigrants in Southeast detainment centers have access to an attorney during removal proceedings.

The lack of legal representation leaves individuals vulnerable to family separation and deportation.

“21 Savage is making this donation public because everyday Americans need to know that ICE is using civil immigration detention as a weapon against immigrants, many of whom, like 21 Savage, have relief from deportation and are able to fix their immigration status,” immigration law attorney Charles H. Kuck said in a statement.

“Creating oppressively adverse conditions of detention, like those in Irwin County, Georgia, far away from family and legal counsel, causes despair and hopelessness, and forces these men and women to give up on their immigration claims. The SPLC, through its Southeast Immigrant Freedom Initiative (SIFI) stands at the front line of this fight and supporting this effort lets all Americans know that the Constitution which protects the least of us, protects all of us.”

21 was arrested and detained by ICE earlier this year following a targeted operation in Atlanta.  Immigration officials said the rapper—who’s real name is She’yaa Bin Abraham-Joseph—was born in the United Kingdom and was unlawfully present in the United States. ICE also referred to 21 as a convicted felon; his legal team disputed those claims.

“He’s not a convicted felon, so they reported that wrong, from their 2014 arrest,” attorney Jacoby Hudson said. “That arrest should be expunged. He has no felony convictions.”

21’s team also said he had entered the U.S. legally at the age of seven and stayed in the country until he had visited the U.K. in 2005. The rapper returned to the U.S. in July of that year under an H-4 visa, which expired in 2006. He reportedly applied for a visa in 2017; the application was still under review at the time of his arrest. He was released on bond less than two weeks later.

“I didn’t see my kids for almost two weeks,” 21 said in an interview with Paper magazine. “There are people in detention centers just sitting for months and even years not being able to see their families. Then some of those people just end up being sent off overnight to a place they ain’t never really lived and they don’t ever see their family after that.”

21 Savage began rapping after the death of his friend in a shootout on his 21st birthday. He has since collaborated with other popular rappers such as Offset, Nicki Minaj, and Post Malone. His music is heavily autobiographic, focusing mainly on the violence of his life, with an emphasis on gun violence and criminal aspects such as murder and drug dealing.