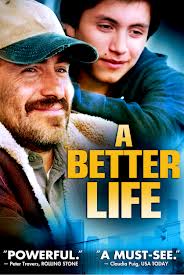 Amany and I watched A Better Life last night on Amazon Instant Video.  This was a poignant, stressful movie about hard working Carlos (Demian Bichir) and his son Luis (Jose Julian).  Carlos works as a gardener in East Los Angeles.  He is an undocumented immigrant and the threat of being caught and deported permeates the film.

When the film begins, Carlos works with another man who owns a truck.  Prior to that, Carlos worked as a day laborer, standing on street corners waiting for work.  But because of his friend with the truck, Carlos has a semi regular gig working for the man's clients.  Carlos has a dream to own his own truck so that he can have the clients and have someone work for him.

This movie could have been a cheesy, exploitative made for television movie.  But director Chris Weitz keeps everythig above the melodrama level and the movie takes some interesting turns.  The film humanizes the undocumented migrant laborer and shows the tough choices that people have to make.  It also illustrates serious problems with our immigration system including the loose border, worker exploitation and the impossibility the undocumented face when trying to build a better life.

Three and a half stars out of five.  Definitely worth watching.