The child migrant surge (and what to do about it)

Are you aware of "the surge?"

The number of undocumented children apprehended crossing the border between Mexico and the United States has more than doubled in the past two years. In the same time period, the number of apprehended adults has only increased by 18 percent.

President Obama recently called the surge of young people at the border as an "urgent humanitarian situation." He requested an additional $1.4 billion to deal with the increase and asked the Federal Emergency Management Agency ("FEMA") to coordinate the federal response.

Customs & Border Patrol officers have apprehended 38,833 unaccompanied minors in fiscal year 2013. This represents a 59% jump from the year before and a 142 percent increase from fiscal year 2011. It is estimated that CBP will arrest and detain 74,000 unaccompanied children this year.

"Unaccompanied" means that these young people are traveling across the desert border without an adult accompanying them.

The vast majority of these children come from Mexico and the three Central American countries of Guatemala, Honduras and El Salvador. The latter three countries account for 74 percent of the surge.

The reasons for the surge seems clear. Each of these countries has seen a spike in violence over the past decade or so. Honduras underwent a military coup in 2009 and now has the world's highest murder rate. El Salvador has the second highest murder rate; Guatemala the fifth.

At the same time, these countries have extreme poverty. Due to increased American ethanol production, the cost of corn has doubled. Family farms have been lost and there is little opportunity in these areas.

Republicans claim that President Obama's decision two years ago to grant deferred action (halting deportations) to undocumented young people is what has led to the surge. But this argument is plainly wrong as DACA (the program's name) would not apply to these children. 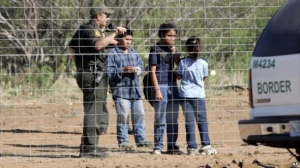 The President can be faulted, I think, for not adjusting to what is essentially a refugee problem. The children who come from Mexico are being sent straight back there without a determination as to whether they have a credible fear of persecution. Children from other countries are being placed in temporary shelters while their deportation proceedings begin.

The Obama Administration will not disclose the location of these shelters and will not allow journalists to inspect them. Another problem is that these children are not entitled to an attorney to protect their interests during the deportation process.

We will continue to monitor this troubling situation. We have reached out to Kids in Need of Defense, an organization that tries to connect volunteer immigration attorneys with these unaccompanied minors who have meritorious cases.

Thanks, as always, for reading.

Jim Hacking
[email protected]
PS - we discuss the border crossing and unaccompanied minors issue in this week's episode.  You can find us by searching for "We Love Immigration" on the iTunes podcast page or by clicking here.