Trump just quietly cut legal immigration by up to 65% 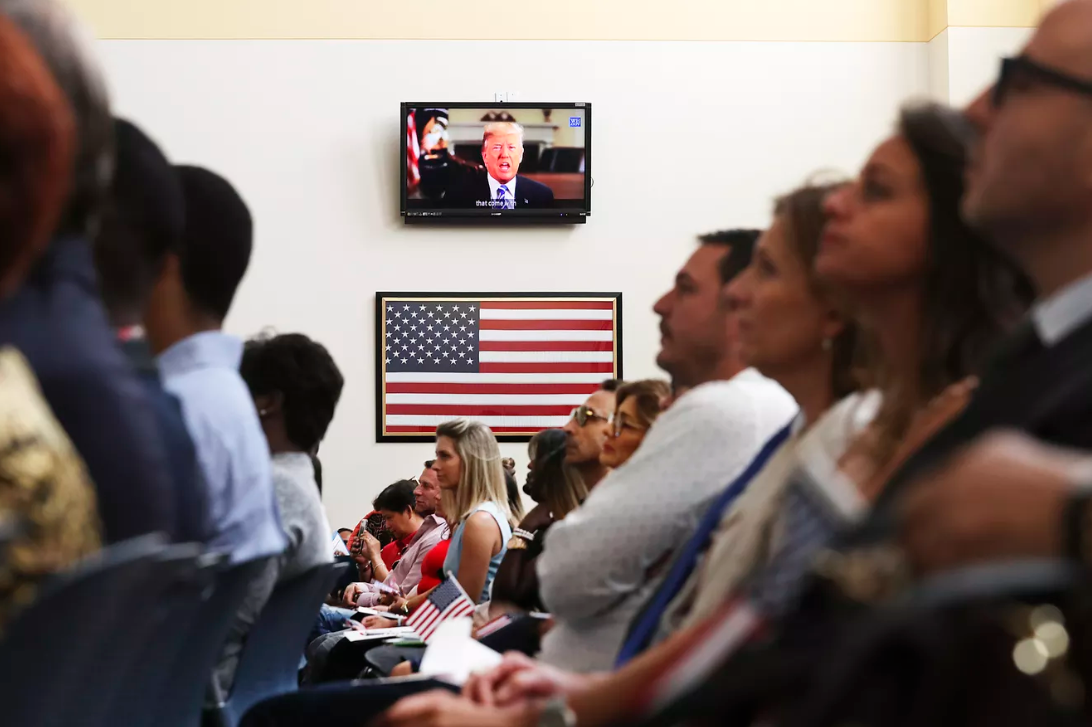 When it goes into effect November 3, the proclamation will make getting into the US much harder for immigrants sponsored by family members, the phenomenon Trump has excoriated as “chain migration.” It will throw up a barrier to those coming through the diversity visa lottery — the subject of Trump’s “shithole countries” rant — which allows the US to accept 55,000 immigrants annually from countries with historically low levels of immigration.

Researchers estimate it could keep up to two-thirds of future immigrants out who would be admitted under current law.

Under the proclamation, immigrants who do not have health insurance and cannot afford to pay medical care costs will not be able to move to the US permanently.

The move could bar roughly 375,000 immigrants annually, based on projections of data from fiscal year 2017, according to Julia Gelatt, a senior policy analyst at the Migration Policy Institute.

Those 375,000 immigrants won’t be affected at random. The proclamation targets immigrants who have come to the US legally under policies Trump and his advisers often attack.

He has blamed the diversity visa lottery and chain migration for bringing in the perpetrators of two terror attacks in New York in December 2017, claiming during his State of the Union address the following January that “these programs present risks we can just no longer afford.”

“Chain migration is a disaster, and very unfair to our country,” he said during another address in February 2018. “The visa lottery is something that should have never been allowed in the first place. People enter a lottery to come into our country. What kind of a system is that? It is time for Congress to act and to protect Americans.”

Trump has already been waging a quiet and effective campaign to reduce overall legal immigration, the long-held goal of groups like the Center for Immigration Studies and the Federation for American Immigration Reform have long sought.

But Friday’s proclamation could be the most drastic of those changes — reshaping the immigration system in the US during Trump’s time in office along exactly the lines restrictionists have wanted.

While the proclamation is on its face about health care, even Joe Grogan, the director of the White House domestic policy council, told reporters on Wednesday that it is “not part of the health care agenda,” but the immigration agenda.

“This is nothing less than a legal immigration ban,” Frank Sharry, executive director of the immigrant advocacy group America’s Voice, said in a statement.

In order to get a green card, an immigrant will have to prove to a consular officer that they will obtain health insurance within 30 days of their arrival in the US. If they can’t, they must demonstrate that they will be able to pay for their medical expenses.

The proclamation does not lay out clear procedures for determining whether immigrants meet the proclamation’s requirements — it will be up to individual consular officers charged with evaluating visa applications and the State Department, which is expected to issue internal guidance on it.

But based on insurance coverage alone, the majority of adults who were granted green cards over the last three years would have been shut out.

According to the Migration Policy Institute, 34 percent of those recent green card recipients are uninsured, and another 31 percent have other health care benefits that don’t count as insurance under the proclamation, including Medicaid or insurance purchased with subsidies on an Affordable Care Act exchange.

Families don’t stop qualifying for individual insurance subsidies until they have a household income that is at least four times the federal poverty line, or over $103,000 for a family of four and nearly $50,000 for an individual. That’s a threshold that is hard to clear for all but the wealthiest immigrants: The median income for a US immigrant household was $56,000, according to the Pew Research Center.

The proclamation applies to all immigrants applying for visas at consulates abroad with the intention of living in the US permanently. There are some limited exceptions: immigrants who already have a valid visa, children of US citizens, unaccompanied children, permanent residents who have been outside of the US for more than one year, and recipients of “special immigrant visas” for Afghans and Iraqis who have aided the US government and their families.

The administration can also make additional exceptions on a case-by-case basis. But parents and spouses of US citizens and the immediate family members of lawful permanent residents are subject to the proclamation.

The rule will fall hardest on immigrants who are sponsored by family members and those from the diversity visa lottery. Just under 84,000 people have already been selected for the diversity lottery in 2020: 38 percent from African countries, 37 percent from European countries, 19 percent from Asia, and the rest from Latin America and Oceania. Immigrants with job offers will have an easier time, as they will likely have health insurance through their employer, Gelatt said.

It’s not clear at this point what income level would be sufficient to be approved for a visa under the proclamation.

A State Department official said Monday that consular officers will decide whether applicants are eligible for a visa under the proclamation based on information available when they apply for a visa, including medical and financial documentation that is already required as part of their application package.

That most likely refers to the income and asset information submitted by a “sponsor,” usually a US citizen or lawful permanent resident family member or an employer, who claims financial responsibility for a visa applicant, immigration lawyer Rafael Urena said.

For the immigrants who are let in, Larry Levitt, executive vice president for health policy at the Kaiser Family Foundation, said that the proclamation is likely to push immigrants to buy short-term or visitor insurance policies, which generally don’t cover pre-existing conditions, and often have caps or limits on benefits. It will also probably discourage immigrants from enrolling in insurance through Medicaid and the Affordable Care Act, he added.

“These new rules are going to add to the confusion and fear surrounding recent immigration policy changes, discouraging lawfully present immigrants from enrolling in programs they are eligible for,” he said.

While his moves to block asylum seekers at the southern border has gotten the most attention, Trump has also taken steps to restrict legal immigration to the US. His travel ban blocking citizens of Iran, Libya, North Korea, Syria, Venezuela, Yemen, and Somalia from entering the US is still in effect and has been upheld by the Supreme Court.

He’s slowed down processing of legal immigrants, almost doubling average wait times for those applying for green cards, employment visas, citizenship, and other benefits by the end of 2018. And he’s slashed the refugee admissions cap to a historic low of 18,000, down from 110,000 just two years ago.

Some within his administration want to go even further. Miller has been the architect of sweeping administrative changes that aim to keep out all but the wealthiest immigrants.

He was behind the so-called “public charge regulation,” which, if it goes into effect October 15, would give immigration officials much more leeway to turn away low-income immigrants based on an evaluation of 20 factors, ranging from the use of certain public benefits programs — including food stamps, Section 8 housing vouchers, and Medicaid — to English language proficiency. That regulation could affect over 382,000 people seeking to enter the US, extend their visa, or upgrade their temporary visa to a green card.

“[Immigration] touches upon everything, but the goal is to create an immigration system that enhances the vibrancy, the unity, the togetherness and the strength of our society,” Miller told the Washington Post.

Trump’s son-in-law and senior adviser Jared Kushner has also reportedly been working on an immigration reform plan that wouldn’t raise immigration levels, but it would move toward a points-based system under which immigrants with higher levels of education, English language skills, and job offers from US companies would be prioritized over family members of US citizens and permanent residents.

Kushner’s plan would need to be passed in Congress, an unlikely prospect when immigration issues have never been so politically fraught. But Trump’s Friday night proclamation accomplishes similar goals without needing to capitulate to Democrats, so long as it survives in court.

Advocates are expected to file legal challenges to the proclamation in the coming weeks. But with a Supreme Court that has already recognized this president’s broad powers to restrict immigration where the administration can provide a rationale, there’s no telling whether the justices will view this case differently.