On Tuesday, House Judiciary and Foreign Affairs subcommittees held a hearing on President Trump’s effort to ban travel to the United States from mostly Muslim-majority countries.

Commonly known as the Muslim ban, the policy went into full effect on Dec. 4, 2017, after the U.S. Supreme Court lifted temporary injunctions imposed by federal courts.

How much has this policy mattered? Based on data from the U.S. Department of State’s Bureau of Consular Affairs, which regularly provides the number of visas issued for all countries, the effect is dramatic.

Below is a graph that tabulates the number of immigrant visas issued each month since March 2017.

The graph excludes non-immigrant visas, which a tourist or a student would receive, for example, and separates into two categories the seven affected countries: the Muslim-majority countries and North Korea and Venezuela. 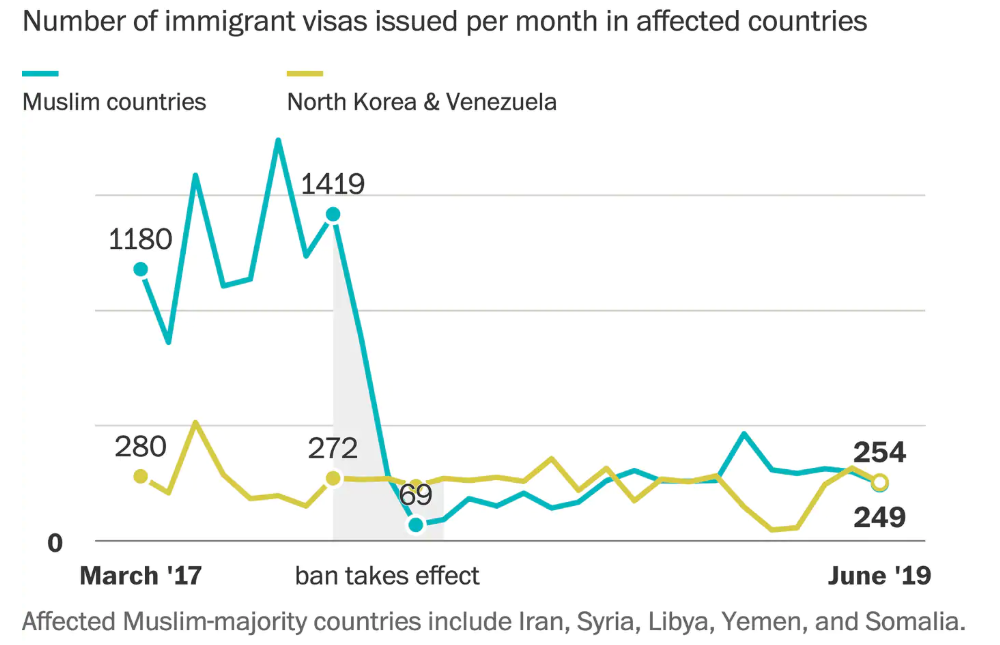 As the chart makes clear, the number of immigrant visas issued to citizens of these Muslim-majority countries dropped sharply — from 1,419 in October 2017 to 69 in January 2018.

The monthly number has ticked up since then, but it remains much lower than it was. Take Iran as an example. Only 537 immigrant visas were issued in 2018 to people born in Iran for the 12 months after the travel ban went into effect.

By contrast, North Korea and Venezuela did not experience a drop in visas issued — contradicting any notion that the travel ban wasn’t a “Muslim ban” because it included two non-Muslim countries.

But the effect of the Muslim ban could be even larger than this graph suggests. State Department data indicates only the “country of chargeability,” where the applicant was born, rather than where they reside.

An immigrant could have been born in Iran but lived in Canada for 30 years. If so, they would be marked as an immigrant from Iran, based on their country of chargeability.

The final issue involves what’s called the “waiver” process. The U.S. government can grant an immigrant a waiver while his or her case undergoes an in-depth review.

A waiver is not an immediate rejection, but the immigrant still will not receive a formal visa until the government determines that he or she won’t pose a threat and that the person’s entry is in the national interest.

The Trump administration argued before the Supreme Court that the waiver process simply allows for “enhanced vetting.”

Since the ban went into effect, 98 percent of people from affected countries who applied for a visa were rejected, and the other 2 percent received a waiver.

However, State Department information does not indicate how many of those 2 percent have received a visa for entry into the United States to date, and there have been lawsuits from potential immigrants who say they have been under waiver for at least 16 months without any resolution.

Without any way to know how many people who received a waiver ultimately got a visa, we cannot fully assess the impact of the ban.

If these people are denied a visa, then the effect of the travel ban will be even larger than what the data shows.

The only way to know is for the State Department to release this information or for members of Congress to demand it.