Mark Twain on Immigration: “only the scum of the population” abuse or oppress immigrants

Many folks know Mark Twain as the author of Huckleberry Finn and his numerous other works, including the Adventures of Tom Sawyer, A Connecticut Yankee and many more.  Twain is also known for his withering wit and his amazing quotes, including:

And my favorite Twain quote is “Whenever you find yourself on the side of the majority, it is time to pause and reflect.”

I thought about Mark Twain when I visited his hometown this week – Hannibal, Missouri.  I went to Hannibal for some depositions on a civil rights case that I am handling.  I arrived in town early so I went down to the river’s edge.  Hannibal has built a small park and I worked on my laptop beneath a clear blue sky. 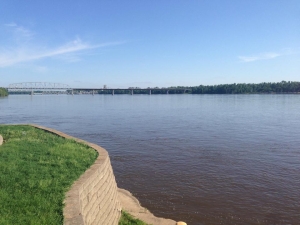 Given Twain’s strong opinions on most topics of the day, I did some research and came to find out that Twain was a forceful voice against the oppression of Chinese immigrants in California.  Although he used the word Chinaman (a word we no longer use), he did not tolerate abuse aimed towards the Chinese immigrants there.

After news reports surfaced of young boys in San Fransisco stoning a Chinese immigrant to death, Twain noted that the Chinese in California suffered the “vilest insults or the cruelest injuries.

He wrote this in his book, Roughing It:

A disorderly [Chinese person] is rare, and a lazy one does not exist… They are a kindly disposed and well treated by the upper classes, all over the Pacific coast.  No Californian gentleman or lady ever abuses or opposes a [Chinese person], under any circumstances, an explanation that seems to be much needed in the East.  Only the scum of the population do it – they and their children; they, and, naturally and consistently the policeman and politicians likewise, for these are the dust-licking pimps and slaves of the scum, there as well as elsewhere in America.

You can see how gifted Twain was by his forceful language and his use of precise terms to get his message across.  I believe my mother has read all of his books and she has visited his house in Hannibal.  He’s a real hero in our home.

One can only imagine what Twain would have to say about the those who vilify immigrants and try to make them a scapegoat for all of our problems in 2014.  I like to think that he’d still want to use phrases like “dust-licking pimps” and “slaves of the scum.”

What do you think?