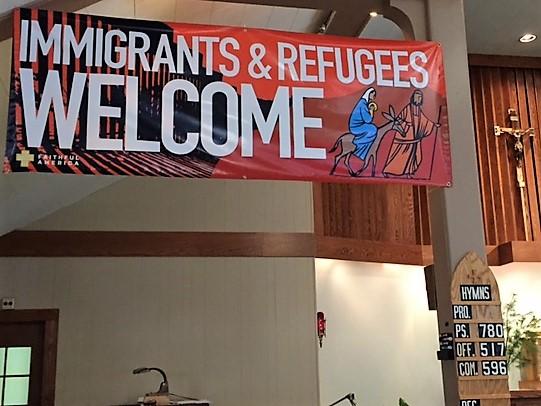 A couple in New Britain, Connecticut were given a deportation order but refused to leave the country last week and sought sanctuary at a local church.  Malik Nayeed bin Rehman and Zahida Altaf, are calling First Congregational Church of Old Lyme home now after choosing not to return to Pakistan, the country they immigrated from.

Bin Rehman and Altaf were visited by a United States Senator, Richard Blumenthal, on Sunday, March 26, 2018.  Two undocumented immigrants, Sujitno Sajuti and Nelson Pinos, before them are also currently seeking sanctuary in other religious institutions in Connecticut.  The couple are hoping for good news as they appeal their removal.

Approximately six immigrants that have taken refuge in places of worship in Connecticut have been granted temporary stays.  Some waited mere days before given the good news, but others waited months.

Entering the United States undocumented in 2000, bin Rehman and Altaf were given a removal order in 2008, telling them they must return to Pakistan.  The couple own a restaurant in New Britain, Pizza Corner, and are the parents of a daughter who is five years old, named Roniya—she is an American citizen.  Roniya is staying with her aunt and uncle for the time being.

Altaf said, “[the church] is home—well, not home, but we’re comfortable here…I’m just worried about my daughter…because she’s not here with us.”

Bin Rehman and Altaf’s nephew said of their situation, “My uncle, he had to give up his pizza restaurant.  He worked hard for 18 years and finally he gets to have his own restaurant, and now it’s taken away from him.”

The waiting game is well on its way as bin Rehman and Altaf’s attorney has filed a motion with the Board of Immigration Appeals, asking for the couple’s cases to be reopened.  The couple has already been denied an emergency stay in the past.