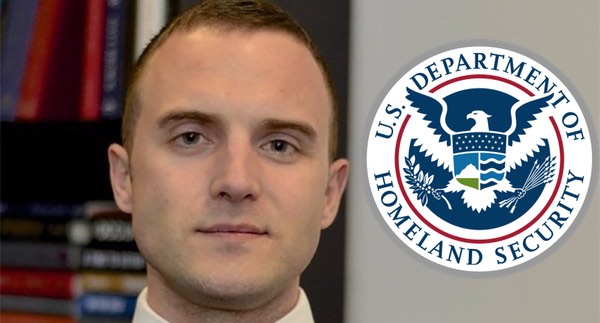 A Department of Homeland Security analyst, Ian Smith, recently resigned after his ties to white nationalist groups came to light.

According to close government officials, he attended immigration policy meetings at the White House.

The Atlantic found and reported on personal emails that Smith shared with prominent white supremacists.

In one e-mail, Smith received a group dinner invitation where the host called his home “judenfrei,” which is a German word used during World War II by the Nazis.  It refers to an area that had been “cleansed” of Jews during the Holocaust.

Smith replied to the e-mail by saying, “They don’t call it Freitag for nothing…I was planning to hit the bar during the dinner hours and talk to people like Matt parrot, etc..”  Freitag is the German word for Friday and Matt Parrot was a spokesman for the neo-Nazi Traditionalist Worker Party.

Smith has not commented.

Before working for the Department of Homeland Security, Smith worked at the Immigration Reform Law Institute.  The Washington Post calls the place a “think tank whose restrictionist immigration views have won broad influence in the Trump White House.”

Former co-workers of Smith at the Department of Homeland Security had not heard Smith air any radical views.  One said, “He’d done a lot of writing, and seemed like a quiet, thoughtful guy—a policy nerd.”

While the emails that were reported on do not contan any outright racist statements made by Smith, they do portray Smith as someone who is at ease in the atmosphere of white supremacy.