Faisal Gets His Ticket to the U.S.

In November of 2017, a nice man in Pakistan scheduled a 25 minute Skype consultation with our office. His name was Faisal.

He told us that his wife Wafa was a lawful permanent resident. Wafa had filed an I-130 petition for an alien relative for Faisail with USCIS on March 20, 2013.

USCIS approved the case on February 11, 2014 and sent the file along to the National Visa Center.

The NVC finished its processing and sent the case to the U.S. embassy in Islamabad.

After that date, the embassy refused to issue a visa to Faisal and would not give him any information regarding the processing of his case.

The case was stuck in the dreaded “Administrative Processing.”

Faisal and Wafa tried everything that they could think of to get the case moving.

Finally, after four and a half years of waiting, they hired us to sue the State Department for the delay.

We filed the mandamus lawsuit in federal court in the District of Columbia on December 13, 2017.

The court clerk’s issued summonses for the case and we served each of the defendants and the local U.S. attorney.

Things started moving on the case.

The U.S. embassy requested additional documents.  The case seemed headed for a decision.

But then the embassy raised a new issue.  They said that because Wafa had lived outside the U.S. for such a long time that she had not maintained sufficient ties to the U.S.

The embassy wondered, “why should we give a visa to Faisal when Wafa doesn’t really live here?”

Of course, the only reason that Wafa was in Pakistan so much was because she wanted to be with her husband.

But our office has handled situations like this many times.  We asked Wafa to come back temporarily to the U.S. to reestablish her residency.

She came back for a brief stay and built up a record of U.S. connections.

In the meantime, the local U.S. attorney who was defending the case kept applying pressure on the embassy to the do the right thing.

When we file lawsuits, we often need a little help from the U.S. attorney and this particular lawyer is a real pro.

But I specifically remember a follow up Skype call that I had with Faisal.

I was in Kansas City for a naturalization interview.

When we had our call, I was sitting in my car waiting to go into USCIS.

Things looked bleak.  We were not sure if we were going to be able to get the case resolved.

Faisal and I had a long talk.

But then we submitted Wafa’s updated information reestablishing her ties in the U.S. and the case was approved.

The visa was approved after nearly a six year wait!

This case took longer than most of our visa delays but we got it done.

And last week, as sometimes happened, we met our client face to face when the case was actually over.

Faisal is here in St. Louis and we got to chat.  He brought us a nice gift.

It was great to meet him.  To have him standing here in our office.

The hard work paid off.

Best of luck to Faisal and Wafa as they begin their new life together in the U.S. 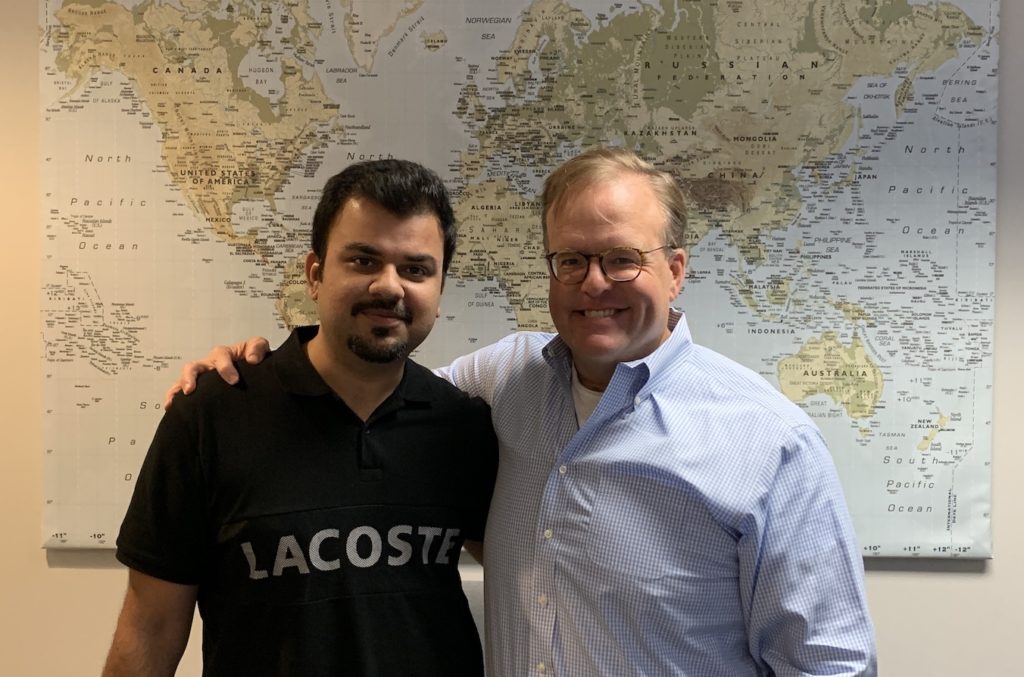