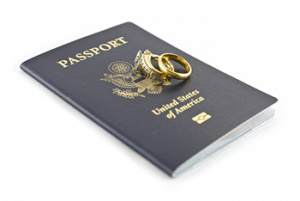 Jim Hacking: How does the entire process work, of bringing my fiance to the United States, and getting them a Green Card?

Today's question comes from Siree. And Siree is a US citizen, and Siree has a fiance back home in India that Siree wants to bring to the United States. And Siree's wondering, how does that process work? So let me walk you through it.

So only US citizens can sponsor their fiances. Welfare permanent residents, Green Card holders, are not allowed to sponsor fiances that come to the United States. So luckily Siree's already a citizen, and that takes care of one big hurdle. And so the process works by filing a form called an I129F, paying the filing fee, and submitting documentation of the relationship. And so USCIS has been taking about five or six or seven months to approved I129F's lately. And the things you need to put in there are sort of important. Obviously you have to submit all the right forms, and then you're going to want to submit some particular evidence.

One piece of evidence is that you're going to have to show that you've been in each other's physical presence in the last two years, that is, that at some point in the last two years you've met face-to-face. You cannot file a Fiance Visa if you have not met your spouse face-to-face: that's something that surprises people sometimes when they come to see us. And part of our job, as the immigration lawyer, is to prove that. We're going to have to develop evidence, like your travel receipts, your plane tickets, photos, phone calls, emails, anything related to the trip itself. If you went to see shows, or tickets for anything, if you took train rides or if you met with family; you're going to want to provide proof of all of that, because you have to sort of convince the immigration service that you have in fact met face-to-face. That's one thing.

So you send all that off to the Immigration Service and that goes to the USCIS, to the right Service Center, and then once that's approved, like I said, five, six, seven months later, then your case is sent for processing at the Embassy. At this stage you have to file a electronic form with the Department of State: so you're switching from one agency to another. At this point you're switching from the US Citizenship and Immigration Service, which approved the Fiance Petition, and then sends it onto the State Department for processing at the Embassy.

And during that stage, you're going to file a form called the DS160, and this is an electronic form that you fill out, and it has a lot of the same information that was already asked in the I129F, but like I said, you're dealing with a different agency, so you have to outline all that same evidence and same information again. There might be a little bit more about criminal history of the foreign national. We have seen more and more questions added to the DS160, so it does take a little bit of doing, and then we have to submit evidence in the form of a checklist to the Immigration Service to get everything to the Embassy.

And then once it gets to the Embassy, each Embassy does things a little differently, it depends which Embassy you're dealing with: some are very organized and methodical; some are very laid back and 'loosey-goosey' and so one good thing about working with our firm, or other experienced immigration firms, is that we've sort of developed a list of the things that each Embassy that we've dealt with before, has asked for: the little nuances or the little unusual things about that particular Embassy; and so that's really helpful.

In the past there weren't many interviews on these standalone Green Card cases where the Embassy has already approved the person to come, but we've been seeing more and more that USCIS, which is the agency that actually handles the Green Card, is scheduling more of these for interview, so you might get an interview on that, and you and your spouse are, at that point, going to have to show that it's a valid marriage and demonstrate the relationship.

So that's sort of the whole process, from start to finish. That's how you get the Green Card for the foreign national through the fiance process.

Right now, through a strange quirk in the way things are working, fiances are coming to the United States more quickly than spouses. So if you have not already gotten married, that is probably an option that you want to discuss with an experienced immigration lawyer.

One thing you don't want to do is what a client of ours recently did, and that is to pretend that they had a fiance case, at least that's what USCIS thought; USCIS thought they were actually already married. So one thing that you have to be careful about is not actually filing for a fiance case when you're in fact a spouse. And some people try to do that, or allege to try to do that, because they think they're spouse/fiance is going to get here faster. So basically, if the relationship has been consummated, and a ceremony has been held in which it was recorded with the local government, for the most part you're going to be considered married, and if you try to come as a fiance, that's most likely going to get denied.

And if you have any questions or emails about this, or suggestions on other videos that you'd like for us to do, you can either record it at immigrationanswersshow.com, or you can email us at [email protected] You can also always give us a call to Schedule a Consult if you like, 314-961-8200.

Thanks a lot, and we hope you find this helpful.