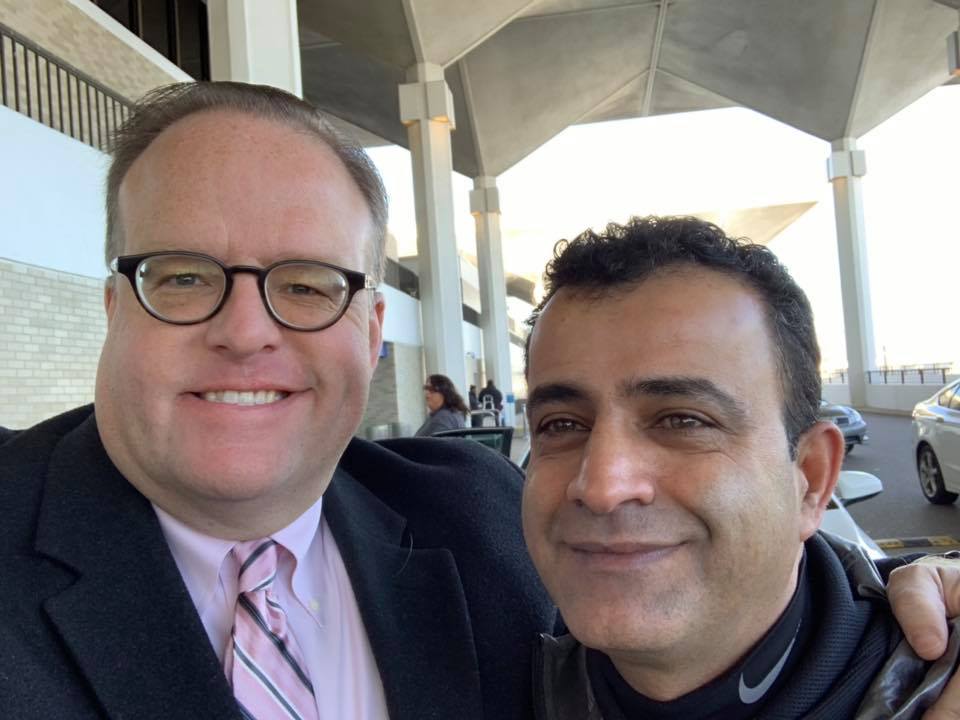 This is my friend, Mahmoud.

In July of 2011, I headed into our conference room for a consult with a potential new client. Little did I know that I would spend the next seven years trying to keep my visitor from being deported.

Mahmoud came to see me from Mississippi, where he lives. He slid a stack of paper to me and I could tell from the header that it was from the Memphis Immigration Court.

Mahmoud had quite the story to tell. He had come to the U.S. from Palestine in the mid-1990s to attend Kent State University. Later, he transferred to Ole Miss, working on his doctorate. He had a wife and four kids. His wife and three of the children were all Palestinian nationals and were in the U.S. on F2 visas.

They had hired a big Memphis immigration law firm to try and help them stay in the U.S. The head of that law firm met with Mahmoud and suggested that Mahmoud take his chances with an asylum claim in immigration court.

It was a risky move for sure. One that our office would never had made.

Mahmoud followed his lawyer’s advice and sought asylum as a defense to deportation in the Memphis court.

His lawyer passed his case off to an associate. Ultimately, the asylum case was denied after a hearing.

But when we dug into the case during our meeting, we found that Judge Charles Pazar had prohibited Mahmoud’s attorneys from submitting any evidence of Mahmoud’s future persecution because they had missed the filing deadline.

But it was even worse than that.

Not only had the big Memphis firm blown filing deadlines, the head of their firm also missed a defense that was clearly available to them. Non-LPR (lawful permanent resident) cancellation of removal.

Non-LPR cancellation of removal allows for someone in the U.S. to apply for relief from deportation if they have a qualifying U.S. relative who would suffer extreme hardship if that non-resident were to be deported.

Mahmoud clearly satisfied each of the requirements for non-LPR cancellation, but his lawyers missed it.

So here we were – with two days before the appeal was due.

I didn’t want to take the case. It was a mess and it would involve going after another lawyer for his mistakes. But I was so upset at what a poor job this law firm had done (and had charged thousands of dollars for), that I agreed to get involved.

We contacted the prior law firm and obtained the file. We filed an appeal with the Board of Immigration Appeals. We were prepared to file a Lozada motion, which is a motion alleging ineffective assistance of counsel by the big Memphis firm. However, the law firm’s lawyer had reached out to the Office of Chief Counsel and gotten them to agree to ask the BIA to send the case back to Memphis so the Hacking Immigration Law could properly raise the cancellation defense to deportation.

These maneuvers took years and years. In August of 2015, we finally had our hearing before Judge Pazar in which we raised a spirited and strong cancellation case.

We demonstrated how Mahmoud’s U.S. citizen daughter would be harmed if her father was deported back to Palestine. We talked about the life she had built here, how hard life was in Palestine and how much greater opportunity she had here in the States.

But our case was still not over. The Department of Homeland Security decided to appeal Judge Pazar’s grant of cancellation to the Board of Immigration Appeals. Earlier this year, the BIA rejected that appeal.

Mahmoud now has his green card. And today, in Memphis, the judge who replaced Judge Pazar on the bench terminated Mahmoud’s deportation proceedings, wishing him good luck.

Now Mahmoud is a lawful permanent resident. In five years, he can apply for citizenship.

And when he gets sworn in as a U.S. citizen, I will be there to celebrate with him.