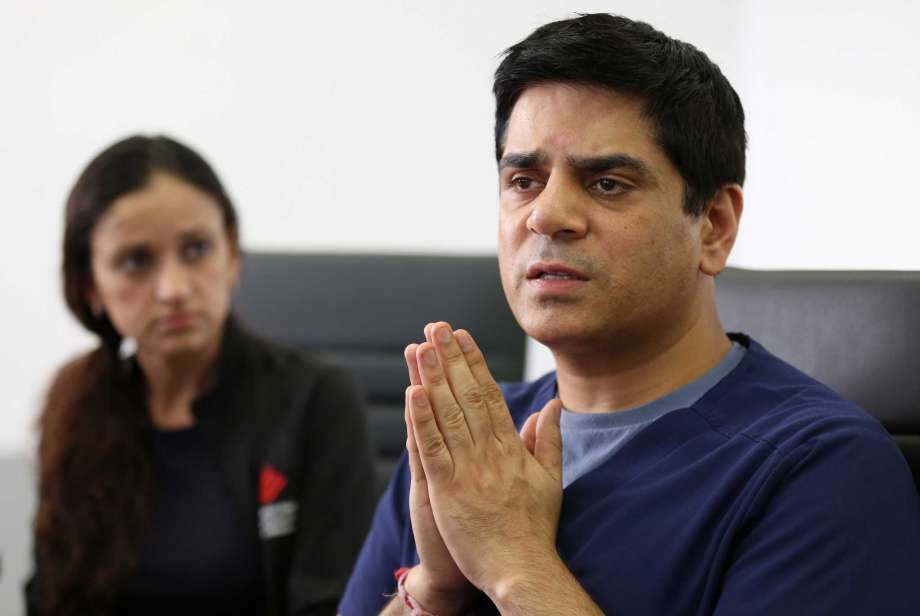 Two Indian physicians who reside in Houston, Texas, face imminent deportation from the United States due to a paperwork error.

Dr. Pankaj Satija is a neurologist who helped found the Pain and Headache Centers of Texas.  His wife, Dr. Monnika Ummat, have resided in the U.S. for many, many years.  Dr. Ummat is also a neurologist.  She specializes in treating epilepsy at Texas Children's Hospital.  They are the parents of 2 U.S. citizens, 7-year-old Ralph and 4-year-old Zoeey.

The pair faced removal last week after immigration officials refused to extend Dr. Satija's and Dr. Ummat's temporary permission to stay in the U.S.  The decision by Homeland Security may cause dozens of Texans who suffer from neurological disorders to be without their doctors.

"I have 50 patients today and 40 patients tomorrow," said Dr. Satija. "I'm just concerned they'll be left in a lurch. They could land up in the emergency room."

The Houston Methodist Hospital System sponsored Dr. Satija for a green card (lawful permanent resident status) in 2008.  Dr. Ummat would be eligible to adjust status as his spouse.  But because the couple are from India and because USCIS has a nearly decade-long backlog for Indian professionals to adjust status, they have not yet received their LPR status.

The couple regularly renewed their travel documents and work authorizations.  But last year, their permission to travel abroad was extended for only one year instead of two years, which had typically been what they received.  Later snafus by Customs and Border Patrol contributed to the confusion.

The couple never noticed the problem.  Then Dr. Satija's brother called from India to tell him that their father had been admitted into intensive care and was gravely ill.  The entire family flew to India.

When they returned to the U.S., they learned that they had left the U.S. on expired advance parole documents (the formal name for the travel documents).

CBP allowed the couple to enter the U.S. on deferred inspection, which means they were allowed in but would have to explain how they believed they were entitled to stay at a later date.

When they brought their paperwork back to CBP, they were initially told that everything would be okay.  But the next day, they were told "[s]omebody up there has decided you have to leave the country in the next 24 hours."

According to the Houston Chronicle, in two expansive immigration memos the Trump administration issued in February, it directed the nation's three main immigration agencies to "sparingly" use the practice of parole, though it hasn't yet detailed the new regulations.

At the end of last week, DHS did agree to give the couple another 90 days to try and sort out the situation.

This story demonstrates a few themes we talk about at the Hacking Immigration Law on a regular basis.

First, it is absolutely ridiculous that we have an immigration system that takes nine years for a pair of super-qualified doctors from India to get lawful resident status.

Second, it is absurd that we are even talking about the possibility of deporting these people who serve sick Americans every day of their lives.

Third, immigrants are awesome and help this country every day.