Jeh Johnson is the new Secretary of Homeland Security as appointed by the Senate as of last Monday. Johnson is in charge during a turbulent time for immigration enforcement and DHS receiving heavy criticism for their numerous deportations. Immigration advocates are hoping Johnson will support their mission to offer a path to citizenship and most importantly stop deportations immediately. 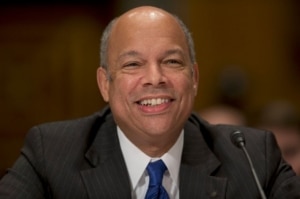 Highest level of deportations in history troubling to lawmakers

The department of Homeland Security has deported over 2 million undocumented immigrants as of early next year under the Obama administration. People are hoping Johnson will take a different approach on immigration that strays away from the “myopic current enforcement-only approach.”

With Johnson being appointed as the head of the agency, there is a possibility that he will decide to take it into a new direction that does not involve deportations. Johnsons has already spoken about his mission for the agency and that is to deport “those who pose a threat to our national security, public safety and the integrity of our borders.”

Johnson’s goal is to continue to evaluate the prosecutorial discretion guidelines to ensure that the Department has their priorities in order and immigrants are treated fairly. The Obama administration’s prosecutorial discretion policy deals with deporting criminal immigrants first instead of starting removal proceedings for Dreamers and other hard working families. In 2012, “45% of the individuals removed had been convicted of no crime whatsoever.” This statistic proves that law enforcement are looking at the wrong thing when deporting immigrants. Immigrants that pose no threat to public safety should not take up the time that officials could be using to make the streets safer by detaining dangerous criminals. Several lawmakers have raised concerns over the high levels of deportations and many hope that be reevaluating the policies and procedures of who to deport will help lower this number.

If you have questions regarding applying for a visa or immigration laws, contact us at 314-961-8200 or visit our contact page.