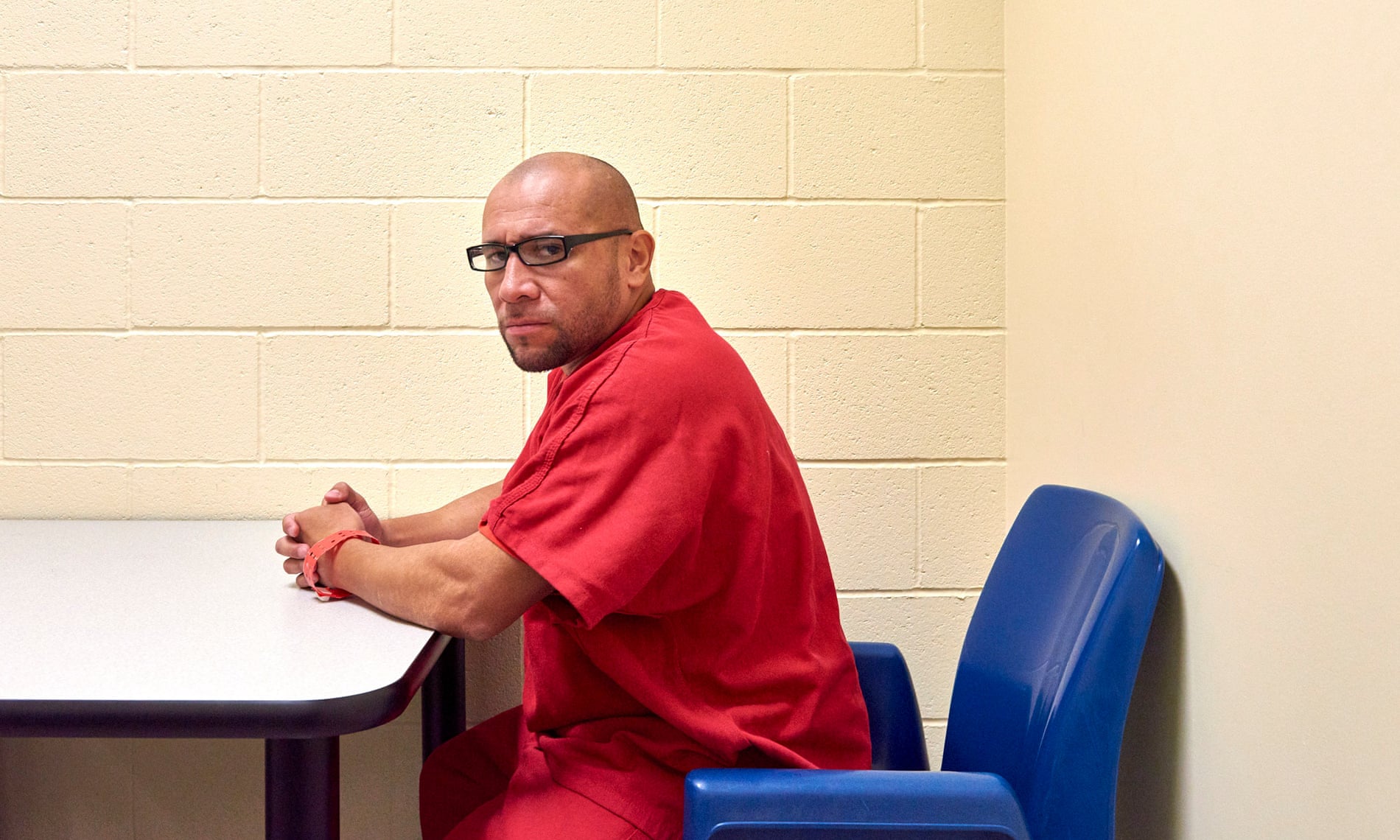 Jose Segovia Benitez survived two tours of duty with the US Marine Corps, a bomb blast, and a traumatic brain injury.

But the US is not helping him recover. On the contrary, the government may be leading him to his death.

Segovia is currently imprisoned at an Immigration and Customs Enforcement (Ice) detention center in Adelanto, California where he says he is being denied critical medical and mental health care. The 38-year-old veteran is facing deportation to El Salvador, a country he left when he was three years old and where his loved ones fear he could be killed.

“I’m not going to die here. I refuse to die here,” Segovia said on a recent morning, wearing a red jail uniform and seated in a cramped room with no windows to the outside.

During his 21 months of detention in the southern California facility, Ice has failed to provide adequate care for Segovia’s serious heart condition, denied him proper treatment for his post-traumatic stress disorder (PTSD), and repeatedly placed him in isolation, according to the former marine and his lawyers. The consequences, they fear, could be fatal.

Segovia is one of fifteen current detainees who filed a federal lawsuit against Ice last month alleging medical neglect and horrific conditions that rise to the level of “torture”. He is also one of the estimated thousands of veterans who have faced deportation over the years despite their service to the country.

He said he didn’t know how much more he could take and was desperate to leave Adelanto and return to his hometown and family in Long Beach, California: “I want my freedom so bad … I try to hold onto any kind of strength I have, but I’m not doing well mentally, emotionally, physically.”

Segovia, who became a legal permanent resident soon after arriving in the US as a child, became interested in the military at a very young age.

Raised in Long Beach, a city just south of Los Angeles, he has early memories of playing with toy soldiers. In high school, he was different from his peers and drawn to the discipline of the Junior Reserve Officers’ Training Corps, a US Army program for students.

At age 18 in 1999, one week after he graduated high school, he enlisted in the marines.

“I joined not to go to war, because nobody ever signs up for that,” he said.

But then war happened.

He was deployed as part of the initial Iraq invasion in 2003, ultimately completing two tours of duty.

His mother, Martha Garcia, recalled the stress of his deployment and her constant fear that soldiers would show up at her door announcing his death: “I didn’t want him to go. It was very, very scary for me. But he said, ‘No, I wanna go.’”

Segovia survived – but barely. He was honorably discharged in 2004 after he was badly injured by an explosive device in Iraq the year before.

He struggles to talk about it today: “I’ve seen combat. I don’t like that subject, I stay away from it.”

Life after war was a battle, and he said he had a hard time returning to society and finding a stable routine.

Doctors suggested he find jobs that didn’t involve loud noises, because that triggered his PTSD, his mother said. He worked a range of jobs, including in retail, security and manual labor. Meanwhile, he struggled to get the urgent mental health treatment he needed from Veterans Affairs, she said, adding it took roughly seven years to properly diagnose his PTSD and traumatic brain injury.

“I was trying to seek help,” Segovia Benitez said. “Meanwhile, you’re doing your own therapy.”

He struggled with substance abuse, had run-ins with the law, and was ultimately convicted of numerous serious felony crimes related to drug possession and violent offenses. He was sent to prison and due to be released in January of 2018.

He was eager to get out, his mother recalled. She was planning to make him a welcome-home meal of tamales.

But he never came. After serving his sentence, Ice agents were awaiting him at the prison to take him into custody.

Immigrants have long served in the military, with an estimated 5,000 enlisting each year. Service has traditionally provided a path to citizenship for foreign-born members, and roughly 130,000 of them have been naturalized since 2001.

However bureaucratic challenges mean some immigrant service members don’t complete it, and under the Trump administration, a series of changes have made the process even harder. Some also mistakenly believe citizenship is automatic, advocates say. When immigrant veterans who haven’t been naturalized are convicted of certain felonies, they can then be deported.

Ice says it doesn’t know how many veterans it has deported, but groups that assist deported veterans have tracked roughly 400 cases since 2014. Advocates estimate there are likely thousands.

In deportation proceedings, Ice is required to take into consideration a veteran’s health and deployment record and elevate their cases to senior officials, but a federal watchdog department recently found that the agency frequently failed to do so.

Segovia repeatedly submitted paperwork for naturalization, but the process was never completed, according to Brandee Dudzic, one of his advocates.

“The system was designed for them to fail at every single step of the way,” said Dudzic, founder of Repatriate Our Patriots. Immigrant service members sometimes start the immigration process and then get deployed and the paperwork doesn’t follow them, or they have difficulties navigating bureaucracy due to PTSD.

As a result, disabled veterans have ended up in prisons and then Ice detention centers where their struggles to access healthcare are exacerbated and their mental health further deteriorates.

“This was not what I envisioned my life to be,” Segovia said.

He noted that he was already incarcerated for his offenses, served his sentence and paid his debts to society. Instead of letting him rebuild his life, he is being punished again – in new and more severe ways: “You hear about double jeopardy, but this feels like triple jeopardy … I did time, and now I’m being exiled?”

One of the most upsetting moments of his detention, he said, was when an Ice agent suggested that America was not his home. “‘Thank you for your service, but you were not born in this country’,” Segovia recalled the officer saying.

The immigration jail where Segovia has lived for more than 20 months is located in Adelanto, a remote desert town that is a two-hour drive inland from Los Angeles. A road sign at the edge of town advertises a “city with unlimited possibilities”.

Geo Group, the private prison company that runs the jail, has repeatedly been accused of abuse and neglect. Last year, a US government audit found there were “nooses” made out of bedsheets in 15 cells, which guards overlooked even though someone had died by suicide in 2017. That year, three detainees died within three months, and there were reports of at least five suicide attempts.

“These people don’t know how to treat combat stress veterans,” Segovia said. “It’s a slap in the face. I’ve been in a downward spiral of depression.”

He has been isolated in segregation multiple times, typically for three to five days, during which time he did not receive daily medical or mental health check-ins, according to the recent lawsuit filed by Disability Rights Advocates and other groups.

He has repeatedly complained of chest pain, dizziness and other heart problems, but has been denied timely care, the suit said. Lawyers alleged that the facility “entirely ignored” multiple abnormal cardiology test results, and that on 3 July, after he reported significant chest pain, he wasn’t evaluated for seven hours. At that point, the facility called 911 and took him to emergency care.

Segovia had no way to tell his family, and after his mother didn’t hear from him by phone, she rushed to the detention center in person, demanding answers, she recalled.

Eventually, she heard from the family member of another detainee that he had been hospitalized, but she couldn’t find out where he was taken and wasn’t able to visit him.

“How am I going to get better?” Segovia asked. Some days, he added, “I shut down. I close everybody out.”

An Ice spokeswoman said in a statement to the Guardian that he is a “citizen of El Salvador” who was “ordered removed to his home country” and has an “extensive criminal history”.

A Geo Group spokesperson did not comment on Segovia’s case, but said the allegations in the lawsuit were “baseless” and that the corporation’s medical programs “provide 24/7 access to health care free of charge … supported by professional teams, including full-time physicians”. The VA declined to comment.

Segovia’s advocates are now urging California governor Gavin Newsom to pardon him for his criminal record, which would shield him from deportation to El Salvador, where he would be vulnerable to gang violence.

Garcia said she wanted Newsom to know that her son’s incarceration and pending deportation was ruining so many lives. “It’s not just my son. My whole family is broken. We’re asking him to please help.”

For Segovia, being forced to live in his birth country is unfathomable: “There’s nothing over there for me.”

Segovia said he tries to stay positive and spends time assisting deaf detainees, who can’t communicate with the guards. He learned sign language after he thought he might lose his hearing due to injuries overseas.

“I don’t like to see injustices. I have to stand up for those that need help,” he said. “I am not afraid of retaliation because I’ve been through worse.”

Somedays, he wants to be deported, just to feel free. But he continues to fight for the sake of his family.

And despite everything, his love for his country remains deep, he said. He has a tattoo of the Statue of Liberty on the side of his body and another on his arm that says USMC to commemorate his service.

“Patriotism is still a part of me. I took an oath long ago, and I haven’t untaken that oath,” he said, adding, “Everything I love is here. Everything I know is in Long Beach, California.”