If only they would follow the rules. This is what many citizens will say of undocumented immigrants, claiming that if they only followed the established immigration process to the letter, they wouldn't have any issues. This is an understandable assumption, but we see with cases like that of Rudy Zamora, this isn't always the case. Mr. Zamora, an immigrant from Mexico, is proof that the current immigration process doesn't always work as it is intended to.

Mr. Zamora has spent his entire life as a bystander in elections rather than a participant and when he was finally able to legally submit his naturalization paperwork, he did. Yet, backlogs in naturalization processing prevented him from voting in the Nevada caucuses, an election that a reasonable person would say he applied in time for.

There are many cases similar to that of Mr. Zamora. In fact, over half a million immigrants who applied for naturalization months ago are still waiting on their answer and are coming to terms with the fact that they most likely won't hear back before the November election. The significance of this is that despite the fact that the next president will play a huge role in their lives, they do not get a voice in who that person may be. Moreover, whether thousands of immigrants can vote or not will significantly affect the outcome of the election due to the candidates’ drastically different views on immigration.

There has been a swell in state level applications, specifically a 31.2% increase, at the United States Citizenship and Immigration Services (USCIS) that has led to a backlog that will prevent many from casting their vote.

A spokesperson from the USCIS claims that the agency is on track to meet its goal of processing applications between five and seven months, but he acknowledges that there has been a significant increase in applications across the board. The additional time it may take for particular applications depends on the processing times of specific state offices.

Diving deeper into the fluctuation of naturalization application processing times reveals that it is not uncommon for volume to spike around election time. However, the spike this year is more extreme than in the past because of the particular political climate. While one presidential nominee plans to crack down on immigration, the other nominee aspires to streamline the process and offer a pathway to citizenship for undocumented immigrants. With this in mind, it makes sense that this election is especially pertinent to immigrants.

These additional votes that could be cast could have a significant impact in the election, especially in swing states like Florida, which has more than 66,100 applications pending and consistently wavers between blue and red.

Luckily, it does appear that the USCIS is taking steps to expedite processing times through actions such as sending additional staff to offices with backlogs as well as authorizing overtime for these offices.

The fact of the matter is that this type of backlog should never hinder a person from expressing their opinions through a ballot, yet our country is still in this situation. As the elections creeps closer and closer, more immigrants with pending applications hope and pray they might be able to participate in one of the biggest elections this century has seen. 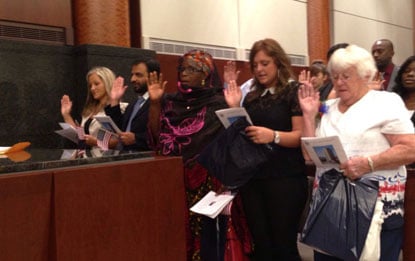