Spread the love
The New York Yankees came to town last week.  In 2013, baseball held a farewell tour for longtime closer, Mariano Rivera.  This year, his former shortstop, Derek Jeter, has announced his own plans to retire.  The Yankees only play in St. Louis every six years, so this was definitely a high point on the schedule. My middle son, Yusuf, is 10 years old and is (much to my chagrin) a huge Yankees fan.  Not entirely sure how this happened, but we believe it stems from the fact that his early childhood friend, Leo moved to the Empire State when the 2 boys were 5.  I also suspect that the Yankees’ storied history of 27 world championships has contributed somewhat. Last year, Yusuf read Derek Jeter’s autobiography, The Life You Imagine, which was a terrific book about life, sportsmanship, hard work and a championship mentality.  Yusuf is a second baseman and not a shortstop, so Jeter is not his favorite player, but everyone in our house respects the dedicated, no-nonsense professionalism that Jeter has exhibited for the past two decades playing for the Yankees. Yusuf and his two brothers (Cardinals fans through and through) really wanted to see the Yankees.  Yusuf has been waiting his whole baseball life to see the pinstripes in person.  So before the season began, I bought seats from some season-ticket holding fans. 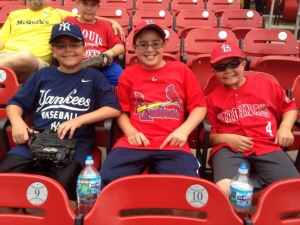 As game day approached, the boys kept asking me if we had been able to score tickets.  About a week before the game, I couldn’t take the abuse any more so I confessed that we had 4 tickets to the game.  I told them our seats were way up high in right field, but they were still super excited to see the big game. I left work early that day so we could get to Busch Stadium for batting practice.  As we entered the gate, I casually mentioned that our seats were not up high, but rather six rows behind the Yankees’ dugout.  The boys went crazy. We got great pictures of Jeter, coach Joe Girardi and another favorite player, Ichiro Suzuki from Japan.  Fortunately for the three Cardinals fans in the group, the home team won 6-0.  One brother got a ball from catcher Brian McCann, the other brother got a ball autographed by Cardinals reliever, Randy Choate.  But it was Yusuf’s biggest smile that made the evening so special.  Even though he was sad the Yankees lost, we all had a very entertaining night. Throughout the game, I did notice a surprising number of Japanese reporters.  Yusuf reminded me that the Yankees had three players from Japan – Ichiro and pitchers Masahiro Tanaka and Hiroki Kuroda.  Turns out they have 10 players from overseas. It dawned on me that night that each of these players would have worked with an immigration lawyer to help them get their work visas to play professional baseball in the U.S.  If the players have not already become US citizens or green card holders, they would need employment visas in order to play ball in the States.
Of course, my dream as an immigration lawyer is to represent the St. Louis Cardinals and help them obtain work visas for their international players. These days, most major league teams have players from throughout the world playing in their ranks.  The world is shrinking and that includes the world of Major League Baseball.  So glad we were there to witness this special game. Thanks for reading. Jim
[email protected] PS # 1 – my new immigration book, Case Denied: The Top Ten Ways People Sink Their Immigration Case, is headed to print.  If you would like us to send you a free copy, please click here and provide your mailing information.  We will let you know when we expect the copies back from the printer in the next few weeks.
PS # 2 - we are live and on the air.  Subscribe to the We Love Immigration podcast by clicking here.  Each week, we discuss the hot immigration topics of the day.